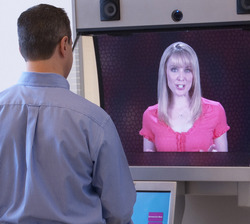 September 7, 2010 - Plano, TX (PRWEB) - TelePresence Tech has been granted a US Patent for its invention of TelePresence Centers with capabilities of transmitting agents to appear at customer sites with eye contact for live two-way communication. Existing call centers with VOIP phone systems can upgrade to transmit IP video to be received by customers on computer monitors, laptops, video enabled tablets, home cable televisions and smart phones. Instead of having faceless communication by phone, companies can reach out to customers for face-to-face interaction in real time.

In the five years since Duffie White, CEO of TelePresence Tech, submitted his patent application, numerous pilot projects have been underway through his European Partner, Luc De Backer, of Teleportel. This has included a bank in Holland that uses 3D TelePresence from the city center bank to their branch banks. Another application has been 3D TelePresence receptionists that serve multiple lobby receptions at one time. Also, a city in Europe has installed TelePresence Tech systems in outlying police stations for citizens to file police reports at the central police station.